Talaash is really an exploration of loss, grief, redemption and closure that uses the police procedural/murder mystery only as a carrier. The brave whopper at the end that brings it all together would alienate a lot of viewers, as it has many critics - going by the review headings (thankfully I've stopped reading them beyond that). For me it was the ultimate aha! moment, a rare occurrence across the thousands of movies I've seen. An absolute delight throughout!

(A note of advice: Don't go in expecting a high class feature length episode of CID.)
Posted by Filmphile at 7:22 AM 2 comments:

Wow action setpieces. Bondian beginning that matches Bourne. Endearing Salman-Katrina chemistry. This exotic visual feast is among the better films of a year which has had TDKR, Shanghai & GOW. Congratulations Mr. Kabir Khan, Mr. Neelesh Mishra & Mr. Aditya Chopra... waiting for the next Tiger adventure, a full-on save-the-world spy caper. And yes it was great to see Girish Karnad and Roshan Seth in remakarkable roles after long.
Posted by Filmphile at 2:21 AM No comments:

Gripping, Edge of the seat, Nail biting, White knuckle thriller are just a few phrases that seem to have been invented to describe movies like Sujoy Ghosh's Kahaani. The best Hindi thriller post Sarfarosh is a puzzle within a puzzle with a solid whack-on-the-head conclusion. It stands tall with the best of international genre cinema. Hollywood are you looking?
Posted by Filmphile at 8:46 AM No comments:

Karan Malhotra’s Agneepath, Mukul Anand would have been proud, Martin Scorcese would appreciate 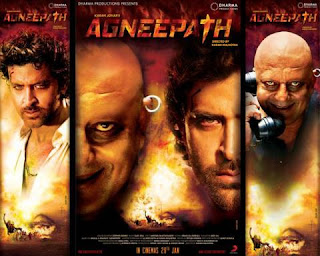 There was a time when Hindi movies began with titles coming up in English, Hindi and Urdu, nowadays they are mostly meant to be read by people familiar with the English alphabet. But Patiala House goes back to the good old days, and that's not the only pleasant surprise it had in store for me. Nikhil Advani strikes back, and how! He makes a movie which while easy to dismiss as just another big budget mainstream Hindi film with songs and dances is a lot more than that. A movie has 'something' if it brings lumps in your throat, and controls your heartbeat and breathing easily. Among other things Patiala House reminds us that even life saving medicines come with expiry dates, after which they turn into poison, and this is especially true about various long-past-expiry-date "this is the propah way to live" systems that at best poison humanity at the grassroots level. Finally, when formula works, nothing can beat it, great dialogues, amazing Akshay, wow Anushka Sharma and awesome Rishi Kapoor backed by a uniformly excellent supporting cast. Patiala House made my Sunday.
Posted by Filmphile at 6:22 AM No comments:

The life and husbands of Susanna

It takes a lot to shake up my cinema jaded senses... Vishal Bhardawaj has been able to do that with every movie of his including Saat Khoon Maaf, few filmmakers, whether its Ashutosh Gowariker, Farhan Akthar or Rakeysh Omprakash Mehra, who initially showed brilliance have continued to push the envelope like Mr. Bhardawaj. Though I felt '7 Khoon' got a little tired in the last 15 minutes or so but, what a movie! what a deliciously detailed, wonderfully bizarre movie!
Posted by Filmphile at 5:51 AM No comments:

Ideally Robot should have been made in the 80s (at probably 1/100th of its present budget), with less songs and many more punchy dialogues and thumpier scenes. Then it would have been ideal stuff for some pleasantly nostalgic viewings on lazy Sunday afternoons in Set Max/Star Gold/Zee Cinema. Coming as it is, in 2010, it's fun (the first half sprightlier than the second which is frequently shot down by unwelcome songs) but could have used some quality creative imagination on the script level to produce several 'aha' moments, rather than bludgeon the viewers with the combined might of lucre and technology (abundance of resources at disposal tends to blunt creativity, read that somewhere and have over the years found many reasons to believe it) I have a feeling that director Shankar is the kumbh-ke-mele-mein-khoya-hua-bhai of Michael Bay. Yeah, yeah I did not enter the theater expecting subtle and classy cinema. But hey I did not even come across a satisfying number of hoot-worthy scenes like I did in Hindustani or Pokkiri (the frame-by-frame remake 'Wanted' had a wickeder atmosphere and hence methinks it was a definite improvement but that's another story).

Maybe its a cultural remove at work but the intentionally comic scenes in films from South usually turn me off, Robot is no exception (for that that matter the humor present in the Japanese films of Akira Kurosawa also make me cringe; call me racist if you will, which was what a reader called Mayank Shekhar after reading his less-than-enthusiastic review of this film in Hindustan Times). Coming back to those idle Sunday afternoons, if I have a choice between Nagarjuna's Meri Jung 'The One Man Army' and Robot, I would go for the former for my 'paisa vasool' entertainment.
Posted by Filmphile at 5:40 AM No comments: